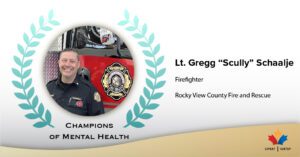 Gregg Schaalje, Scully, to everyone who knows him, has spent much of his firefighting career advocating for mental health. When asked what inspired him to do this work, Scully points back to an incident early in his career as a volunteer firefighter. His team responded to a fatal car accident, and as a rookie, he was tasked with holding the light for the attending medics. This gave a young Scully a clear vision of the scene and the devastation of the wreck, whose passengers were trapped when the car caught on fire.

The call could have resulted in a permanent trauma, preventing Scully from pursuing a career in firefighting, but his Chief called in a psychologist a couple of days later, and offered the team a debrief. With Critical Incident Stress Management (CISM) still a new program, Scully’s experience with the CISM team enabled him to process the trauma of that scene. It provided a closure that he credits with saving his fledgling firefighting career.  Six years later, he volunteered to be a part of a new CISM team in Medicine Hat.

Those actions taken by Scully’s first Fire Chief showed Scully how important it is to step up for mental health. He has since seen the impacts of stigma on PSP, and he believes it is still a big issue in the PSP community. He has, however, also seen improvements, such as training opportunities and the offering of programs to support resilience. Scully knows there is still a long way to go when it comes to protecting mental health, and he stresses that organizations need to have procedures and policies in place which enable individuals to take care of their mental health, without having to face stigma when they return to work.  He says modification of duties or reduced opportunities for advancement can’t be allowed to happen.

When it comes to taking care of his own mental health, Scully looks inward to find activities that help to support his own resilience. These days Scully’s resilience support comes from paddle boarding and flying.  He believes that activities which have an impact on resilience are the ones that force the individual to focus on the moment, which means the activity is specific to the individual.

Scully also believes in the value of peer led programs, psychologist support, and a sound evidence base. He has experienced the benefits of trained peer supporters, but also understands that there is a time for mental health professionals to step in.

In his nomination of Scully, Malcolm McNeil said, “Gregg’s efforts, passion, advocacy, presentations, and direct facilitation of peer support services are tremendously influential in reducing mental health stigma, and in directly improving and saving the lives of his fellow first responders.”

Scully doesn’t think of himself as a Champion of Mental Health, but credits the people who have trained and influenced him, for his ability to do this important work.