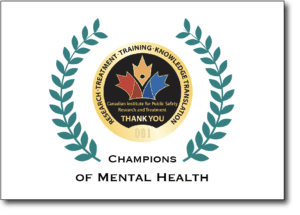 In recent years, efforts have been made in public safety organizations to improve Public Safety Personnel’s mental health and well-being. These efforts can come in the form of programs and services, but they can also be driven by individuals dedicated to improving the well-being of their fellow Public Safety Personnel (PSP). CIPSRT created the Champions of Mental Health program to recognize and celebrate the contributions of individual Canadian PSP to mental health.

To be considered a Champion, a nominee must have done one (or more) of the following:

Mental Health Champions are passionate and genuine, and they walk the talk when it comes to supporting the mental health and well-being of everyone in the organization.

Anyone within a public safety organization, sworn or civilian, can be nominated for recognition by CIPSRT as a Champion of Mental Health. To be considered, a nominee must work for one of CIPSRT’s recognized Canadian public safety sectors:

The nomination period will run from August 3- Sept 10, 2021. The CIPSRT operations staff will review all nomination forms, and the winners will be chosen and announced in November of 2021. To give your Champion the best chance for recognition, be sure to be thorough on the nomination form (incomplete forms will not be reviewed.)

Help us spread the word by:

Nominate your champion today by completing the nomination form below.