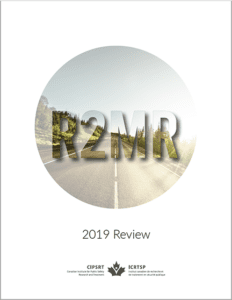 Public Safety Personnel (PSP) are required to respond to high-stress situations and possibly traumatic events. Research results suggest that PSP in Canada are exposed to traumatic events as a regular part of their work1 and that they screen positive for mental health issues at rates higher than the general public2. These findings have increased awareness about mental health concerns among PSP populations and supported movements to provide training and treatment for PSP organizations. Although many training programs have been designed to improve the mental health of PSP, very little research has been conducted to evaluate the effectiveness of these programs.

In response to this concern, Carleton et al.1 surveyed 4000+ PSP in Canada to better understand the links between various types of mental health training programs and two basic outcomes: perceptions about seeking mental health supports and screening positive for mental disorders (based on self-report measures). The results indicated that participants who completed any type of training: were more likely to perceive that support was accessible, and more willing to get help if needed; and less likely to screen positive for some mental health disorders (i.e., posttraumatic stress disorder, major depressive disorder, generalized anxiety disorder, social anxiety disorder).

Like PSP, military personnel can also be exposed to significant stress and potentially psychologically traumatic events. In response to a perceived need for more evidence-informed psychoeducation, the Canadian Armed Forces (CAF) developed The Road to Mental Readiness (R2MR). R2MR is a standard part of CAF training and it is used as a base for further training throughout a career in the CAF. R2MR is delivered in a single-session (4 hours total) and includes an emphasis on:

With permission from the CAF, R2MR was adapted for police by a team working with the Mental Health Commission of Canada (MHCC) and the Calgary Police Service5. The adaptations focused on using police-specific examples rather than military-specific examples in an effort to facilitate training; however, the core content remained the same. The MHCC then revised the R2MR examples to accommodate Paramedics, Fire Services, Communication Services, and Correctional Workers.

Like many other training programs for PSP, R2MR has not been extensively evaluated by the research community6, 7. There are currently only three published studies evaluating the impact of R2MR on participants. The first study was conducted by Carleton et al. 2 with a municipal police sample and assessed the version of the R2MR training provided by the MHCC.  Participants were assessed four times (i.e., pre-training [n=133], post-training [n=113], 6-month follow-up [n= 52], 12-month follow-up [n =59]) and provided feedback on their mental health symptoms, workplace attitudes, and their R2MR experiences (i.e., perceived impact and utilization of R2MR skills).  They were also invited to provide open-ended feedback about their experiences of R2MR at each assessment time. Immediately following training, the results indicated no statistically significant changes in mental health knowledge, resilience, or workplace engagement. At the follow-up assessments, there were small, non-significant increases in self-reported mental health knowledge at 6-months and in resilience at 12-months. The only statistically significant change was a decrease in stigma immediately following training, but this effect disappeared at the 6- and 12-month follow-up. Responses to the open-ended questions indicated the program may have had impacts not measured by the questionnaires; specifically, at post-training, participants reported that the training helped to: increase their mental health awareness, understanding, and communication skills; and reduce the stigma surrounding mental health problems by correcting false beliefs about mental health and the consequences associated with accessing mental health care.

The Carleton et al.2 study was longitudinal and collected data on a single group of PSP participants who received R2MR (i.e., municipal police). A second study by Szeto et al.5 used meta-analytic methods to assess 16 groups of participants who received R2MR from four different PSP sectors (i.e., Corrections, Police Services, Paramedics, and Emergency services). Each participant answered questionnaires designed to assess the stigma surrounding mental illness, resiliency skills, and understanding about workplace mental health at three intervals: pre-training (n=5,598), post-training (n=4,649), and a 3-month follow-up (n=845). Like the Carleton et al.2 study, the pre- to post-training results obtained by Szeto et al.5 indicated small but statistically significant reductions in stigma and increases in resiliency. At the 3-month follow up, the statistically significant reduction in stigma was maintained for three out of the five stigma measure subscales, but the increase in resiliency was no longer statistically significant (though it was still higher than pre- training levels).

There were few significant results. Across the entire study there was no evidence that psychological functioning, resilience, or military performance improved for participants in either condition. When beneficial effects were observed in MHSU, attitudes, intentions, and behaviours, they were small or disappeared over time. The most interesting result was that when fidelity assessments were conducted, they were linked to sustained increases in some outcomes (attitudes and help seeking); when they were not conducted, decreased beneficial or even negative effects were observed for some outcomes (MHSU attitudes, help seeking, and military performance). This highlights the importance of checking to make sure that mental health training programs are delivered properly by well-trained individuals.

The studies conducted by Szeto et al.5 and Fikretoglu et al.4 both show post-intervention reductions in stigma among PSP. This is encouraging given that organizational culture plays a significant role in how R2MR training is received8. Conversations with key informants who have helped to facilitate R2MR training in their organizations indicate that the effectiveness of the training is often influenced by the culture in the workplace. For training to be effective, there needs to be a cultural readiness in the organization, strong leadership support, and the understanding that R2MR is just one part of the puzzle8.

One course might not be enough. Based on the current research data for R2MR2,5, and broader research on PSP-related training programs in general6,1,7, there appears to be sufficient evidence that one session of mental health training may not be enough. To create large and lasting changes, training may be required at regular intervals, and reminders may be needed for program recipients to use their skills and other available resources 2,8,5.

Since the 2007 inception of R2MR by the Canadian Armed Forces (CAF), the designers (i.e., LCol. Bailey, Guest) have engaged in ongoing research and program development to strive for continuous improvements9. Some of the improvements include: content focused on suicide, targeted design to the specific stressors of unique occupations, and an increased focus on self-monitoring of stress and mental health. However, the additional content from the iterative CAF developments does not appear in the version of R2MR provided by MHCC. In December 2018, the MHCC renamed the R2MR program for PSP as “The Working Mind for First Responders.” The MHCC also offers the same content for other organizations under the name “The Working Mind.” The objectives of the course remain the same: reducing stigma, recognizing changes in mental health, and enhancing skills to build resiliency.

In 2018, the CAF graciously created an adaptation of their most recent version of R2MR specifically for diverse PSP.  Public Safety Canada provided financial support in January and April 2018 that allowed 24 PSP from diverse sectors across Canada to be certified as Trainers and then Master Trainers. The team that conducted the training and certification was led by one of the original CAF R2MR designers. The 24 PSP have now trained PSP across Canada on a direct-cost recovery basis.  Currently, there are no published data available assessing the newest version of R2MR designed by the CAF specifically for diverse PSP, but there are several studies underway.

Thanks to ongoing support from Public Safety Canada, the Canadian Institute for Public Safety Research and Treatment (CIPSRT) has continued to support PSP who are providing the R2MR program that was specifically designed for diverse PSP. Continued longitudinal research will be necessary to better understand the immediate and long-term effectiveness of the R2MR program.