September 10th, 2022, is World Suicide Prevention Day. Throughout September, CIPSRT is focused on supporting suicide reduction efforts through education and awareness. We are sharing what we know about suicide among Public Safety Personnel (PSP), and encouraging PSP across the country to learn more about supporting themselves and their co-workers.
Remember, if you or someone you know is thinking about suicide, there are people you can talk to:
• Canada Suicide Prevention Service (CSC) 1-833-456-4566
• Canada Suicide Prevention Service (CSC) in Quebec 1-866-APPELLE
Suicide is one of the top ten causes of death in Canada1. Research results have indicated that individuals who work in public safety personnel organizations experience more incidents of suicidal behaviours (thoughts, plans, attempts) than the general population2,3.

Dr. Simon Hatcher, lead researcher on the project, “Suicide among public safety personnel compared to the general population in Ontario: A case-control study,” shared with CIPSRT what researchers know about PSP and suicide. View a 5 minute video below.

Interested in learning more? Watch the full presentation with Dr. Hatcher.
In addition to the videos above, CIPSRT has created a PSP Suicide Fact Sheet to outline the unique challenges faced by PSP. Click the image to access the fact sheet. 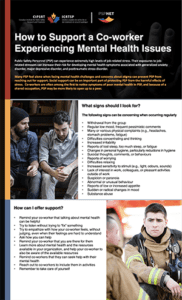